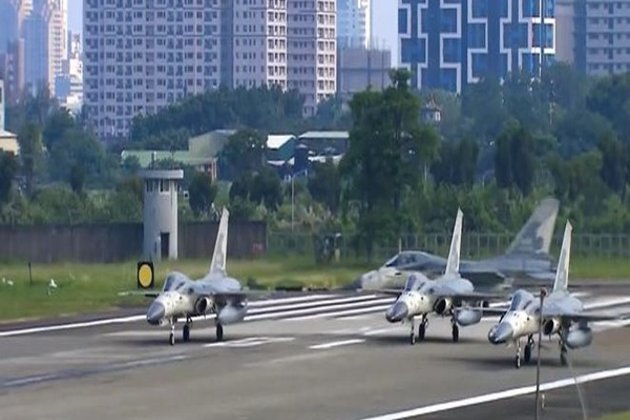 Taipei [Taiwan], August 9 (ANI): Amid rising Chinese aggression, Taiwan's Defense Ministry said that the country is involved in robust training to respond to People's Liberation Army (PLA) which is continuing its military drills and demonstrating that it is a threat to the neighbouring region.

In a tweet, Taiwan's Defence Ministry wrote, "PLA continuing their drills demonstrates its threat to the neighboring region. Training for readiness is one of the main missions to ROCArmedForces. We train anytime and anywhere we can, so we are able to respond to different situations in order."The Ministry said that a total of 10 People's Liberation Army Navy (PLAN) vessels and 45 PLA aircraft around our surrounding region were detected on August 9, 2022 until 1700(GMT8).

It added that the Taiwanese defence forces have monitored the situation and responded to these activities with aircraft in Combat air patrol (CAP), naval vessels, and land-based missile systems.16 of the detected aircraft had flown on the east part of the median line of the Taiwan Strait.

Meanwhile, Taiwan's Foreign Minister Joseph Wu on Tuesday said China used the military drills to influence the international community's freedom of navigation in the waters and airspace of the Taiwan Strait and to prepare for an invasion.

Addressing an international press conference, Wu said China's decision to carry out military exercises in areas surrounding Taiwan is a gross violation of Taiwan's rights under international law and gravely threatens regional peace and security."...China has used the drills in its military playbook to prepare for the invasion of Taiwan. It is conducting large-scale military exercises and missile launches, as well as cyberattacks, disinformation, and economic coercion, in an attempt to weaken public morale in Taiwan," he said."...in terms of the range of its missile tests, China is clearly trying to deter other countries from interfering in its attempt to invade Taiwan," he added.Tensions erupted in the Taiwan strait last week after the visit of US Congressional delegation, led by House Speaker Nancy Pelosi. Taiwan welcomed the visit saying said this trip "once again emphasizes the rock-solid US commitment to Taiwan."This high-stakes visit marked the first visit by a US House Speaker in 25 years since Newt Gingrich came to Taiwan in April 1997. It was also Speaker Pelosi's first trip to Taiwan in over two decades.

China started conducting a number of military exercises near Taiwan which Beijing regards as its breakaway province. More than 100 Chinese warplanes and 10 warships have taken part in the live-fire military drills surrounding Taiwan over the last few days. Multiple Chinese planes and ships were detected around Taiwan Strait, simulating an attack on its main island.

Wu said these joint exercises have had a serious impact on international transportation and trade and hindered the normal operations of one of the busiest air and shipping routes in the Indo-Pacific region.

The Chinese military drills that started last week in at least six areas around the island, were slated to end on Sunday. But the Chinese military today said it will continue drills near Taiwan focused on anti-submarine and air-to-ship strikes.

In an interview with CNN, Taiwan's Foreign Minister said he is not sure whether the leadership in Beijing "have made up their mind" to use force to take Taiwan.

"The important thing for us is that we need to be prepared," he said in the CNN interview. "We want to defend the freedom and democracy that we enjoy over here. Nobody can take that away from us." (ANI)