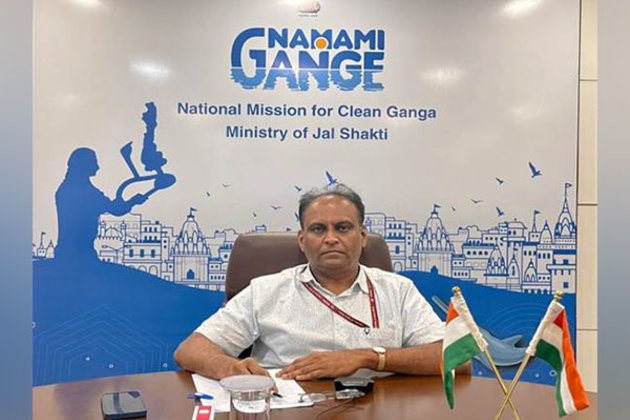 This was announced during the 9th edition of the monthly webinar series "Igniting Young Minds, Rejuvenating Rivers". The theme of this edition was rainwater harvesting.

The session was presided over by the Director General, National Mission for Clean Ganga, G Asok Kumar.

Highlighting the sheer need to ignite young minds about the significance of rainwater harvesting, NMCG Director General said "The tradition of respecting water should be revived in our consciousness."Recalling the "Catch the Rain" campaign, with the tagline 'Catch the Rain' where it falls, when it falls', implemented by him, as Managing Director, National Water Mission, Asok Kumar said that it was launched by Prime Minister Narendra Modi on the occasion of World Water Day on March 22, 2021, in the virtual presence of over a crore people, including sarpanches from all across the country.

This, perhaps, was the world's biggest launch of any water conservation campaign.

"Over 47 lakh rainwater harvesting structures were constructed in the country and several ponds were identified and revived among other water bodies. Around 500 Jal Kendras were also established as part of the campaign," Kumar said.

The stakeholders were nudged to create appropriate rainwater harvesting structures suitable to the climatic conditions and subsoil strata before the monsoon, he noted.

Mentioning the integrated concept of conserving rainwater and preserving heritage, he talked about the traditional water harvesting structures- step wells, in the country.

"Step-wells are excellent pieces of architecture and must be preserved for ensuring a sustainable future for us all. Not merely the construction, but also the maintenance of the rainwater harvesting structures is of utmost importance,"Kumar also emphasized that for the successful implementation of the Namami Gange Mission, there's a need to make the Jal Andolan, a Jan Andolan.

He said that there is an urgent need for the younger generation to take up the mantle of water conservation and appealed to the leading educators to make sure that "not a drop of water goes away from their campuses".

Congratulating everyone on the occasion of Azadi ka Amrit Mahotsav, he called for the "Har Ghar Rainwater Harvesting" campaign in line with "Har Ghar Tiranga".

Sharing his insights about the challenges and solutions regards rainwater harvesting, Ramveer Tanveer, the Pond Man of India, talked about the issues of direct garbage dumping, encroachments and multi-inlets, thereby also elaborating the technologies of Bio-remediation, Aquaculture, aeration and phytoremediation for the redressal.

Through a presentation, he depicted the before-after changes at various ponds' sights in the country.

"The initiatives like 'SelfieWithPond' and 'NatureWalk' have done wonders to arouse the consciousness of people about conservation of ponds, and thus water conservation," Tanveer said.

He said that community participation is central to making any public programme a success.

Speaking about the significance of the conservation of water, Dr Bhanu Pratap Singh mentioned that Tamil Nadu is the first state in the country to make Rainwater Harvesting, compulsory.

He said to prevent the loss of water and resources, "We all must act judiciously as regards its usage in our daily lives."Dr V Chitimini Reddy talked about the importance of community participation in the successful implementation of any large-scale campaign, while Dr Rajesh Naithani emphasized the idea of adding a unique parameter in ranking the educational institutions in the country - the Sustainability Factor, which would ensure the practice of conservation of the environment, especially water conservation, in the setup.

Dr Manjula Jain discussed the concept of 'Water Budget', which the associated University was implementing in the direction of water conservation, and said that "We all have a great role to play in such a noble cause of preserving water, and thus in the existence of humanity in itself." (ANI)