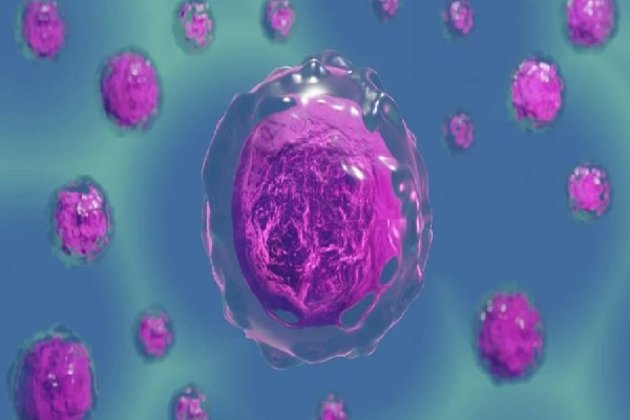 Washington [US], September 14 (ANI): Johns Hopkins Medicine researchers reported that food science principles have helped them determine how unusual droplets within cells stay organised and avoid dissolving into the rest of the cell's gelatinous interior.

The findings of the study were published in the journal 'Science'.

The researchers said their work could advance scientific understanding of cell evolution and help scientists in the food and chemical industry develop better ways to keep liquid mixtures from separating.

The cells of all living organisms hold a collection of mini biological machines called organelles.

These structures run the cell's powerhouse mitochondria, brainy nucleus and other operations, all with a defined border and encased in a membrane.

However, there are other cell parts that appear as viscous, membrane-free "blobs", but they serve distinct purposes, such as regulating genes, sending chemical signals or storage sites for specialised molecules.

Scientists have long thought these somewhat mystifying droplets might be a primordial version of organelles, and the Johns Hopkins-led research team worked with laboratory worms to study them further.

"I hope this work will help convince scientists that biomolecular condensates are highly sophisticated cellular compartments," said Geraldine Seydoux, PhD, the Huntington Sheldon Professor in Medical Discovery and vice dean for basic research at the Johns Hopkins University School of Medicine and investigator at the Howard Hughes Medical Institute.

"We found they have regulated roles and respond to the environment, just like other organelles. And we found that they do have membranes, just not the type we're used to seeing," Seydoux added.

Biomolecular condensates were first dubbed "granules" in the 1970s by scientists who used electron microscopy to peer more closely at the structures in many organisms, including squiggly creatures called C. elegans, whose relatively simple biology has made them a common laboratory model for studying everything from modern gene-cutting technology to protein structure.

The condensates in worms, which look tough and similar in appearance to grains of sand, are known as P granules.

Wang's experiments showed that another protein, PGL-3, creates the viscous liquid droplets, the "core" of P granules and that MEG-3 loiters on the outside of the P granule, making small "clusters" that coat the surface of the P granules.

"What we didn't understand was these proteins could just linger on the outside of P granules yet be so integral to stabilising the interior of the granules," said Seydoux.

The mystery was still unsolved when, in January 2020, Seydoux was looking for the right words to describe their observations.

She Googled "solids stabilising liquids" and found references to the food science concept of Pickering emulsions.

"I had an OMG moment when I read more about this phenomenon," said Seydoux.

An emulsion is a mixture of two liquids that don't normally mix well, like oil and water. A Pickering emulsion is such a mixture that is stabilised, like the everyday carton of milk from the grocery store.

Unprocessed cow milk is naturally unstable, and the fat droplets in milk tend to glom together to reduce the overall surface area among the fat molecules. The fat molecules -- or cream -- rise to the top and separate from the whey or watery liquid in the milk.

To avoid milk separation and stabilise the liquid, dairy processors push milk through a small needle, which breaks up the fat droplets, coats them with a protein called casein and avoids creating a creamy layer of fused fat molecules.

Seydoux said it occurred to her that MEG-3 might act in a way very similar to casein's effect in milk, lowering the surface tension of the droplets to keep them from fusing together.

And MEG-3's tendency to remain around the surface of P granules suggested to her that it acted as a kind of membrane, she adds.

In their experiments, Seydoux and her team showed that PGL-3 droplets coated with MEG-3 stay evenly separated on glass slides, with twice as many droplets compared with uncoated condensates that fuse together, forming fewer and larger droplets on the glass slide.

"This is a well-known phenomenon in food science, and now we see that it may also be happening inside a cell," said Seydoux.

Seydoux's team of postdoctoral students, including cell imaging specialist Andrew Folkmann and biochemist Andrea Putnam, sought help to complete their studies from an expert in physical chemistry who could guide them through the physics of Pickering emulsions.

Several months after adding bioengineer Chiu Fan Lee from the Imperial College of London to the team, he helped them identify a missing component in their MEG-3 worm model: an enzyme called MBK-2 that helps the liquid inside P granules become less viscous.

"Together, these experiments provide an explanation for how this primordial soup inside cells can assemble into compartments that resist fusing together and that respond to developmental cues," said Seydoux.

The team plans further studies to determine the precise physical structure of MEG-3 and additional details about how it works.

If further studies pan out, MEG-3 could provide a renewable resource for developing Pickering emulsions in the food and chemical industry, they said.

Seydoux and the team have filed patents on the use of MEG-3 as a tool for developing Pickering emulsions. (ANI)