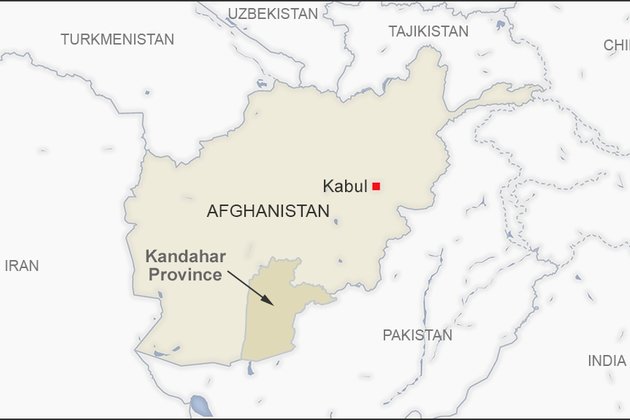 ISLAMABAD - Officials in southern Afghanistan confirmed Sunday that an overnight rocket attack by Taliban insurgents damaged the runway at Kandahar Airport, forcing suspension of all flights.

The attack occurred during ongoing fierce clashes between Afghan security forces and the Taliban in Kandahar and the adjoining city of Lashkar Gah, capital of Helmand province.

Afghan authorities said several rockets struck the airport and all flights out of the country's second-largest city have been halted until the runway is repaired.

"We targeted the Kandahar airport and damaged the runway along with other facilities there," Taliban spokesperson Zabihullah Mujahid told VOA.

"Fighter aircraft were actively using it for launching strikes [against us] and civilian homes in the area. They also bombed and destroyed a hospital in Helmand yesterday," Mujahid said.

Dr. Mohammad Din Narewal, the owner of the private hospital in Lashkar Gah confirmed that the Afghan air force bombed the facility on Saturday, killing one person and injuring three others.

Narewal said the facility was targeted because Afghan security forces mistakenly believed Taliban fighters were under treatment there.

Most of Helmand's districts are under the control of the Taliban.

The Taliban have in recent days staged major assaults on Kandahar, Lashkar Gah and Herat, capital of the western province of the same name.

The Taliban on Saturday apparently came close to taking control of Lashkar Gah and Herat, but government officials said arrival of reinforcements enabled Afghan forces to push back the insurgents.

During fighting Friday, a rocket attack targeted the entrance to the United Nations office in Herat, killing a local security guard and wounding other officers. The U.N. denounced the attack and blamed the Taliban for carrying it out.

The U.N. said Sunday it had called upon the Taliban to undertake a "full investigation and provide answers" concerning the Friday attack. "Perpetrators for the attack that killed an Afghan guard need to be held accountable," the mission said.

Afghanistan's private TOLO news channel reported that out of Herat's 17 districts, only one district and the provincial capital are controlled by Kabul, while the rest are held by the insurgents.

Senior Afghan military and police officials in Helmand told VOA that overnight air strikes killed more than 50 Taliban fighters in Lashkar Gah and clearing operations were underway in parts of the city.

Both the warring sides routinely inflate their battlefield gains, which are difficult to verify because of a lack of independent sources in the Afghan conflict zones.

Security conditions have deteriorated across Afghanistan since May 1, when the United States and NATO allies, after a 20-year presence, began withdrawing their last remaining troops from the country.

The foreign military drawdown apparently emboldened the Taliban, and they unleashed a widespread onslaught against Afghan forces, capturing nearly half of the country's roughly 420 districts. But they have not succeeded in capturing any of Afghanistan's 34 provincial capitals.

The Taliban have previously assaulted and tried to seize control of major cities, including Lashkar Gah, but they were beaten back mainly because Afghan forces at the time had the backing of U.S. military airstrikes.

That cover is no longer available to Afghan forces, though U.S. officials confirmed conducting some strikes against Taliban positions in Helmand in recent days to halt insurgent advances there.

Both Afghan parties to the conflict have ignored calls for resuming U.S.-brokered talks on a peace deal that would the country's long conflict.

The Taliban advances in recent months have raised prospects of the Islamist group's return to power in Afghanistan.

The insurgent group hanged two men Saturday from the entrance gate of a nearby town, accusing them of kidnapping children. An insurgent statement sent to journalists said the men were found guilty of the crime by a Taliban court.

The incident revived memories of the harsh Islamic rule the Taliban had imposed on most of Afghanistan between 1996 and 2001.

The United States, which signed a peace deal with the Taliban in February 2020 to remove all American and allied troops from the country, and other countries, including neighbors of Afghanistan, have warned the Islamist group against trying to militarily regain power, saying such an attempt would only prolong the Afghan civil war.

Some information for this report came from the Associated Press.