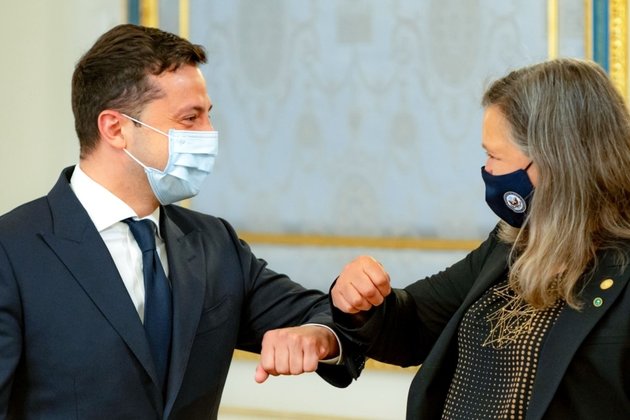 The United States and Germany have reached a deal that will allow the completion of Nord Stream 2, the controversial Russian gas pipeline to Europe, without the imposition of further U.S. sanctions, a senior U.S. official has told Congress.

Undersecretary of State for Political Affairs Victoria Nuland told the Senate Foreign Relations Committee on July 21 that the two governments would shortly announce details of the pact that is intended to address U.S., Eastern, and Central European concerns about the impact of the project.

There is strong bipartisan opposition to the pipeline in Congress as well as in Ukraine and Poland, which fear Nord Stream 2 will undermine European energy security.

The Biden administration also opposes the pipeline but it insists that sanctions won't stop it.

Nuland, the third-ranking U.S. diplomat, told lawmakers that Washington and Berlin would release a joint statement later on July 21 regarding the pipeline. She said the two allies had committed to imposing sanctions on Russia and German companies should Moscow use the pipeline as a political weapon.

State Department Counselor Derek Chollet told RFE/RL during a visit to Kyiv on July 21 that the Biden administration was concerned that 'we would see a pipeline that's constructed and operational with nothing for Ukraine and its energy security, and perhaps even worse, a transatlantic alliance in a partnership with Ukraine that was in turmoil.'

'And so we have sought to try to avoid that scenario, working with German friends to ensure that there's a clear message sent to Russia about expectations for its behavior, that energy cannot be used as a weapon and laying out clear consequences if they were to use energy as a weapon,' Chollet said.

Such a visit could be aimed at easing or offsetting anxiety in Kyiv over Washington's evolving stance on Nord Stream 2 and its effects.

Ukraine's economy has been hurt by a seven-year war against Kremlin-backed separatists in eastern Ukraine, and it is dependent on Russian gas for energy and proceeds from gas transit through existing land-based pipelines to the West.

Biden and German Chancellor Angela Merkel were said to have discussed the pipeline on the sidelines of a G7 summit last month and then again during Merkel's last official visit to the White House on July 15 before she steps down later this year.

Merkel told a visiting Zelenskiy in Berlin on July 12 that 'Ukraine is and will remain a transit country even once Nord Stream 2 is completed.' But she mentioned no concrete measures to achieve such a goal.

'Russia needs to know that from a U.S. and German perspective Ukraine must remain a gas transit country,' Chollet said.

U.S. Secretary of State Antony Blinken said in June that the United States continued to believe that the pipeline is 'ultimately a Russian geopolitical project that threatens European energy security and potentially undermines the security of Ukraine and other countries in the region.'

An adviser to Zelenskiy told RFE/RL on July 21 that the presidential office 'do not see this story as black and white.'

The adviser, Mykhaylo Podolyak, was responding to a Politico report claiming U.S. officials were urging 'an unhappy Ukraine' to 'stay quiet' on the Russian pipeline.

With reporting by Reuters and dpa