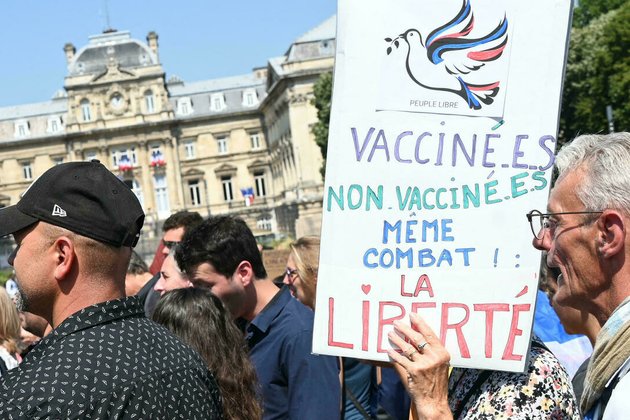 A French law to make anti-Covid vaccinations compulsory for healthcare workers and to enforce the use of "health passes" in public places could be adopted by the end of the week.

The move comes as France races to contain a spike in Delta variant infections, and amid vocal opposition to what many are calling "anti-freedom" measures.

The draft healthcare law has been put on an accelerated path through parliament.

First stop is before the Council of Ministers on Monday, then the National Assembly on Tuesday and Wednesday before it reaches the Senate on Thursday.

French media reports say lawmakers are likely to quickly agree on the wording of the bill, which has broad political support despite bringing angry crowds of more than 100,000 into the streets in protest.

Rightwing MPs have said they will refer the bill to France's Constitutional Council once it is adopted to ensure it strikes the right balance between protecting the population and removing freedoms.

Under the measure, healthcare workers must get themselves vaccinated by September - or lose their jobs - while access to most public places including restaurants, trains and planes will soon be impossible without a "health pass" proving the holder is either fully vaccinated or has recently tested negative for Covid-19.

Also included in the text of the bill is a 10-day legally imposed quarantine period for anyone who tests positive for Covid.

The government on Monday said it would soon clarify the rules for those who cannot be vaccinated such as pregnant women and anyone who is allergic to the ingredients of the vaccine.

Over the past three days, the symbolic mark of 10,000 new contaminations has been passed - a first since the end of May.

Vaccination rates have soared since the new measures, which will take full effect by the end of the month, were announced - with a record 880,000 jabs administered on Friday.

The Health Minister, Olivier Veran, has said the objective of the clampdown is to avoid a fourth virus wave in the autumn and the risk of a return to lockdown.

A recent opinion poll showed a majority of the population supports the government's stance, despite the protests.

The pandemic has cost France more than 111,000 lives and deeply damaged the economy.